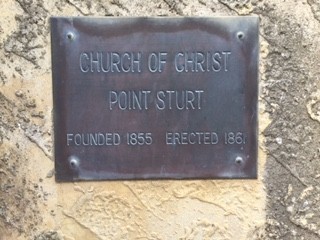 The first meeting at Point Sturt was in the tent home of William Crawford in 1855. A Church was then built, opening in 1861, free of debt.  David Mann supervised the construction of the building and also built the cedar seats. The slate roof which still remains was the work of James Crabb Verco.  An organ was purchased in 1925.

Baptisms were performed in the lake.  In 1868 there were 53 scholars in the Sunday School.

There will be a service at this well maintained building on August 22nd at 2.00pm.  Grant Simpson will be the speaker and Daryll Telfer is leading the service.  Although not in regular use for many years, we are still celebrating 160 years of the faithful witness of this Church.

Enquiries and registrations for attendance can be made to Carolyn Yelland 0412 499 302.

In this edition you will find:

Messages from our State Minister and our President

News from the Colonel Light Gardens Church of Christ

Join us for our Churches of Christ celebration night at Aldgate Church of Christ At the Village Well on Friday November 19th from 7pm.

We will be sharing some fantastic stories about new ministry initaitives emerging around the state as well as hearing from our State Minister, Peter Barney.

We will also celebrate the ordination of Craig Schultz

All welcome. Please join us.

Churche sof Christ Modbury are seeking to appoint a full-time Ministry Team Leader commencing early to mid-2022 for an initial term of 5 years but with a vision for long term leadership.

Expressions of Interest for this position, including a C.V., will be received up to Friday 26th November 2021 and should include a covering letter briefly addressing the above essential and desirable requirements.

Further enquiries and Expressions of Interest initially directed to our Ministry Search Team via lindaw_mcofc@adam.com.au or call Linda on 0439 808 876

A congregation profile is attached. More information available at the link below